skip to main | skip to sidebar

Well it is Saturday morning and I am setting here doing the end of the month paper work that has to be done. It is raining here and has been raining since yesterday afternoon. The phones are quite I guess most people are not worried about tractor parts on a day like today. However, I have had some calls. I just priced out an engine kit for a Ford 2110 compact (Japanese) tractor. The kit is about $1200.00 give or take a little depending on the bearings that he needs. I have sold engine kits for the past 28 years for different tractors, but have only been able to get this kit for about 6 months. I have had a demand for compact tractor kits for about 12 years but had to send people back to the OEM dealers to get their engine parts .The OEM engine kit for the 2110 is about $2500.00. So there are some savings there.
Yesterday, I had a customer with a JD 2510 needing an engine because his had spun a main bearing. He had been quoted $5000 for a short block from his local dealer. I found him a good used take out engine for $2700.00 . Maybe on Monday, I will have an answer on what he wants to do.
Even in this bad economy, the phones are still ringing people are looking for parts to get there garden tractors ready, to get there farm tractors ready and go another year. Next week I will start to rebuild a JD 3010 diesel engine. I have to take the block to the machine shop on Monday to get it cleaned and have Cam bearings installed. I will walk you through the rebuilding process as I do it. I also have a IH carburetor coming to be rebuilt for a pulling tractor. I will walk you through the rebuilding/modifying process on it.
Posted by Eric at 6:54 AM No comments: Links to this post

Posted by Eric at 11:15 AM No comments: Links to this post

Posted by Eric at 10:53 AM No comments: Links to this post

I also found some new lights that have been made to restoration standards. I had some of them in the booth on display and will soon have pricing and on hand stock to sell. There are lights for Allis Chambers, John Deere, Farmall & IH, Fords, David Brown, Massey Ferguson and Massey Harris. These are in addition to the lights we were already stocking.

Posted by Eric at 10:21 AM No comments: Links to this post 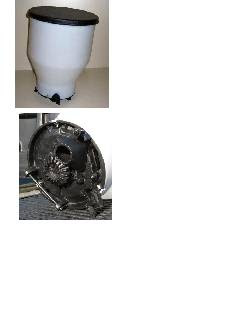 I spent last week at the National Farm Machinery Show in Louisville KY exhibiting with 2 of my friends. We sell some of the same parts as well as each of us kinda specialize in different areas as well. Displaying together, we bring a large amount of experience and knowledge to answer questions and solve our customers problems so they can get the right part. I met one of Tracy's customers with a JD 8430 that I spoke with 2 years ago helping him to solve transmission problem or a hydraulic problem. It has been to long and I cannot remember which one. The show brought a new set of faces each day. Each looking for different parts, each looking for a solution, and some surprised that they needed alot more info about there tractor to get an answer.
The most popular tractor that people were looking for parts was a JD 4020. This is a little unusual. The parts are plentiful for these tractors so generally I get asked more about the odd tractors. People were looking for tricycle steering knuckles, engines, transmission parts, sway blocks ,pto shafts, sheet metal!!, and hydraulic pumps. These are all parts we have and most of them are in-stock and ready to be shipped.
I also had lots of questions about what was wrong with their hydraulic systems, or fuel systems or cranking problems. I had one customer tell me how he unscrewed the hydraulic line coming from the hydraulic pump and plugged the line with his finger to see if it had any pressure. I then told him his pump was not working and he said " How do you know the pump won't work" I said " If the pump worked you would be missing a hand or an arm or you would be dead!!" He kinda chuckled and asked " How do you figure that? " I said" High pressure hydraulic fluid will will blow through your skin and it starts to kill you. The doctor will start cutting parts off until they get ahead of your hands and arms dying and if they don't get ahead of it your buddys get to carry you out to the grave yard" I don't think he realized until then what he had done. Tech Tip #1 DO NOT PRESSURE CHECK HYDRAULICS OR FUEL SYSTEMS WITH YOUR HANDS THEY MAKE SPECIAL TOOLS FOR THIS THAT WILL NOT DIE.
If I did not talk to you then come back next year and come by the booth to see me.

Eric Benton
Posted by Eric at 5:04 PM No comments: Links to this post

Friday was the last day of the Southern Farm Show in Raleigh NC. The number of people that were there was probably more than day one and two combined. I was busy enough that I did not get a chance to go and get a hotdog for lunch until about 2.30 in the afternoon and the crowd did not thin out until 3.30 . The most asked about part I had on display was a E5NN10849BA tach/guage cluster that goes in the dash of a Ford tractor. It fits
2600, 3600, 3900, 4100, 4600, 5600, 6600, 7700 and some other models. I had one couple asking about a Tillotson carburetor and that is one that I don't get asked about very often. The 2nd most asked about part was the carburetor I had there which was a 17A11 Zenith carb. The 17A11 fits lots of different tractors like a IH 240, 330, 340, 404, MF TO20, TO30, TO35, 35, 50, MH 50, AC WD and others.
The show ended at 4 o'clock and the madhouse began, all the exhibitors trying to get loaded and on the road. I beat the rush hour traffic out of Raleigh just barely and made it home in time to have dinner with my wife.
Today, I am unloading some of my parts and loading others to go to the National Farm Machinery Show in Louisville KY. I will be there next week exhibiting parts. I hope to see some of you at the show.
Thanks,
Eric
Posted by Eric at 6:17 AM No comments: Links to this post

Farm Show and an Introduction

Farm Show and an Introduction
I have spent the past 2 days at the Raleigh Farm Show exhibiting tractor parts and talking to previous customers and hopefully a few new customers. I work 3 shows a year where I take a small sample of the tractor parts I sell and display them to the public. I have parts for JD, Ford, IH, Case,MF,Oliver,AC, and other makes. I am one of the owners of Southeast Tractor Parts located in Jefferson SC . I intend to write about Life behind a parts counter, tractor parts, fixin tractors and tractor pulling. Life behind a parts counter will be the stories that I have accumlated from selling parts for 28 years. Tractor parts will be a more detailed list of the different parts I stock to repair your tractor. Fixin tractors will be info on repairing whatever I might be working on in the shop. I don't work on many tractors anymore because I selling parts takes up most of my time. However, I will rebuild a hydraulic pump, build a water pump or sometimes build an engine if I can squeeze it in my schedule. Tractor Pulling is my hobby. I pull a Farmall Super MTA that I built with A Handfull of Tools and A Hammer.
That's all for today!
Eric
Posted by Eric at 6:57 PM No comments: Links to this post